To hear tell, business would be booming and we’d all be dancing in the streets if it were not for “the purple building” and “that lady on Norfolk alley who keeps complaining.” Such is the state of denial the California Music and Culture Association (CMAC) lives in as they plot to foment another war between neighbors and nightclubs in South of Market.

The purple building represents the threat of new development adjacent to existing nightclubs and the Norfolk neighbor has been driving the club owners crazy because she keeps asking the Department of Alcoholic Beverage Control (ABC) to enforce the law. 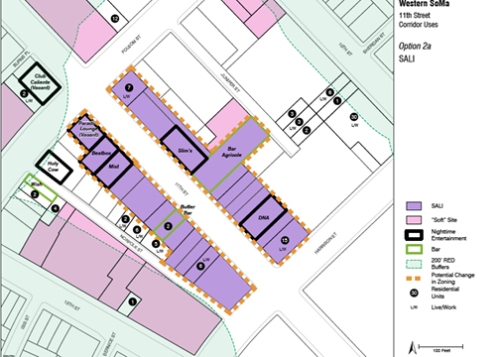 This option, like nearly all the others, would remove 11th Street from the Mixed-Use General (MUG) zoning district that is the predominant mixed-use zoning north of Harrison Street, and change it to the non-residential light industrial zoning that exists south of Harrison Street.

To that end, CMAC, which has generously spread campaign cash all over city hall, is calling in its chits as the Western SoMa Community Plan moves towards adoption. Supervisor Jane Kim has prepared a series of options that will be presented to the Planning Commission next Thursday that would elevate nighttime entertainment to a fully-permitted status and, in the process, the neighbors along 11th Street would find themselves demoted to legal but non-conforming status.

Kim could conceivably become the first member of the Board of Supervisors to down-zone some of her own constituents.

She has scheduled a meeting on November 15 at 6:00 p.m. in Don Ramon’s upstairs bar at 225 11th Street to discuss her plans. Ironically, the entertainment industry will be holding another of their secret meetings right down the street at BeatBox, 314 11th Street at practically the same time. The neighbors were not invited to the latter.

Ever since nightclubs began to relocate into South of Market back in the ’80s, there have been periods of occasional conflict. On October 10, 1990, an organization called “Concerned Citizens of 11th Street” addressed an open letter to clubs that declared:

“This area is a neighborhood of both homeowners and tenants, many of whom lived here long before the advent of the nightclubs. We are hard working people of modest means who struggle to maintain a decent and safe quality of life for our families. When the nightclubs started coming into our community, we did not protest. We didn’t imagine that there would come a time when we would be living virtually under a state of siege. Our perception is that much of the problems we have stem from the patrons of your nightclubs.”

The 1990 South of Market Plan sought to find common ground. Throughout most of South of Market, housing became an as-of-right, fully-permitted use and the nightclubs were all grandfathered in. An uneasy peace has existed ever since, interrupted on occasion by periodic attempts by the entertainment industry to undo the 1990 compromise. CMACs latest assault on the 11th Street neighbors is being led by some of the same players who brought the nightclubs into SoMa in the first place.

It is extremely rare to reverse an as-of-right designation. Several planners I checked with could not recall the last time such a thing has happened. If it were a conditional use, a future rezoning might shift the zoning one way or another, either to non-permitted status or to as-of-right, but fully-permitted generally means that it’s settled law. The city put out the welcome mat to encourage people to come down to South of Market, to find a place to live or buy property, move in and become part of the future of SoMa. Now, 22 years later, the Planning Commission finds itself in the unusual position of having to say, oops!

What would non-conforming status mean to the neighbors? The family that owns the purple building, also know as 340 11th Street, can forget about their plans to build the 20-unit mixed-use residential project that’s been entitled since 2005. Every other property owner would find that their own future options have been reduced to service and light industrial uses. If you own a condo, your ability to alter the envelope of your building or change its use in any way is limited and your resale value will take a dive. If you contemplate selling, remember that the zoning classification on the real estate listing will change from residential to industrial.

The current venues are not under any threat. They are completely safe and are here to stay. They have the right to expand. The Western SoMa Task Force puts the burden of sound mitigation on any new construction adjacent to the clubs. The task force approved language that would allow existing permits to be carried over into new construction if their original building is demolished, allows Limited Live Performance permits along the Folsom Street neighborhood commercial corridor and, if there is truly a need for more entertainment venues, opens up practically 1/3 of the entire Plan Area, the SALI and WMUO zoning districts south of Harrison Street, to all forms of entertainment.

If any of Jane Kim’s options are adopted, what would the entertainment industry gain? Blight, and that seems to be just fine with some of their advocates. The proposed zoning severely limits development options for the whole street and, contrary to CMAC’s implication, as-of-right status does not allow nightclubs to make more noise and down-zoning the neighbors does not remove their fundamental right to the peaceful and quiet use and enjoyment of their homes.

How arrogant for an industry that we allowed to come into our neighborhood to then turn around and try to drive us out! Chances are, if this new zoning is adopted, the clubs will have blown any hope for greater cooperation with their neighbors and should look forward to many more years of conflict.