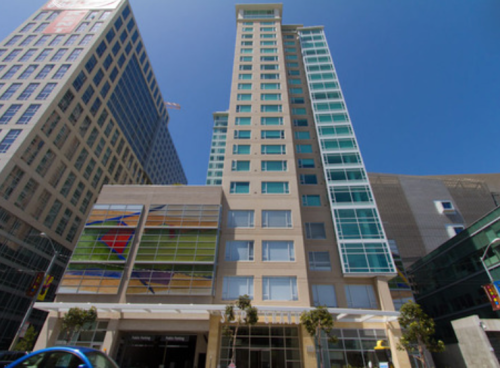 The much maligned SoMa Grand, a 22 story glass tower of expensive condos at 1160 Mission Street, was hit with a lawsuit in San Francisco Superior Court for numerous construction defects and building standard violations. Owners of the luxury units are seeking damages in excess of $4 million as a result of the construction defects.

SoMa Grand was the first “luxury-serviced” condominium project in the Mid-Market neighborhood, offering “visual excitement, rich textures, and a polished sense of design” in a “transitional neighborhood,” according to a brochure promoting the project which sold out all units despite the economic downturn of the housing market.

According to the lawsuit, by 2011 the building began to experience significant waterproofing issues in the exterior concrete masonry walls, subterranean garage walls and the expansive podium deck. Exterior sealant joint failures of the pre-cast concrete walls and window defects were also identified.

John King, the San Francisco Chronicle’s architectural critic dissed the building shortly before it opened its doors in 2009, lamenting that it “has the soul of a background building in a foreground location with the most awkward element of the show – its girth – on full display. What you see is what you get, and what you get never changes.”

Many of the same players who brought us the SoMa Grand are involved in the monstrosity under construction at 5th and Folsom Street, frequently described as a “SoMa Grand tipped over on its side.”