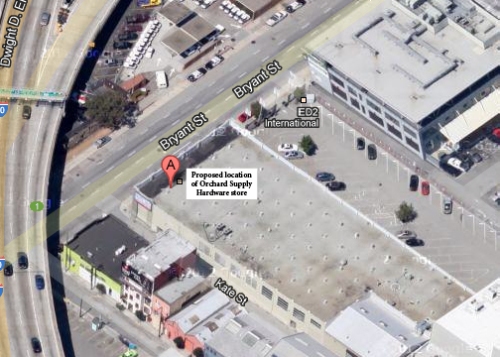 The nationwide Orchard Supply Hardware chain will bring a “suburban-style” big box retail development proposal before the Planning Commission on February 14. This retrofit of an existing structure at 975 Bryant Street puts most of its design features into a main entrance opening onto an adjacent parking lot and would have a minimal presence on the sidewalk side of the building.

Located in an Eastern Neighborhoods portion of SoMa, zoning controls don’t require the kind of streetscape protections built into the Western SoMa Plan but, because new formula retail uses are subject to a Conditional Use hearing, the Planning Commission has considerable discretion as to the final appearance of the 32,407 square foot project.

As more retail and commercial uses move into South of Market, a pattern has developed that takes advantage of the old loading dock configurations of existing industrial buildings but neglects Planning Department and community efforts to activate the main streets of emerging neighborhoods.

The Bed, Bath and Beyond building at 9th and Bryant Street is the worst example of how an entire development can ignore its surroundings. When originally built, most stores had entrances that opened onto the sidewalks but, one by one, they were closed off and nearly all stores now open onto the parking structure in the middle of the building. Three sides of the building offer blank walls to the outside.

A couple of years ago, Planning Commissioners pushed back hard against the TJ Max proposal on Harrison Street. The developers of that project were reluctant to even replace the cash registers left over from the former Staples store at the site … minimal investment to maximize profit. They were ultimately required to punch holes along the Harrison Street side of the building for windows and create a sidewalk-oriented entrance.

The area surrounding the Orchard project has seen a lot of ambitious development in the last few years, with an eclectic mix of service and light industrial uses, popular restaurants and several large residential projects opening up around Showplace Square.