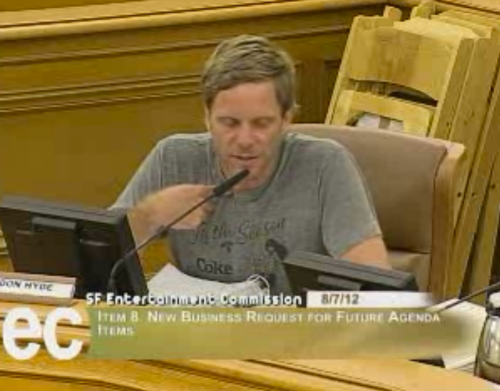 Hyde was speaking on the adequacy of the Environmental Impact Report (EIR) for the Western SoMa Community Plan at a special hearing on Thursday, July 26, 2012.

“I’m here representing the Entertainment Commission today,” he began. “We set up a special group to look at the EIR and the impacts on entertainment and the neighborhood and we have three complaints that we would sort of like to bring before you that were not addressed in the EIR.”

After being informed that he had no such authority, Hyde addressed an apology to Planning Commission President Rodney Fong. He wrote, “It is my understanding that I misspoke in my statements around the Planning Commissions hearing on the West SOMA EIR hearing. I did not want to imply that I was representing the commissions official views but rather the concerns that I as a commissioner have around the plans.”

The City Attorney’s office indicated that they will make sure that the Planning Commission Secretary receives a copy of the email and makes the correction a part of the official record.

At last night’s Entertainment Commission meeting, Commissioner Bryant Tan, who chaired the special subcommittee that Hyde referred to, announced that the subcommittee will be dissolved.

One response to “Hyde apologizes to Planning Commission for misleading testimony”