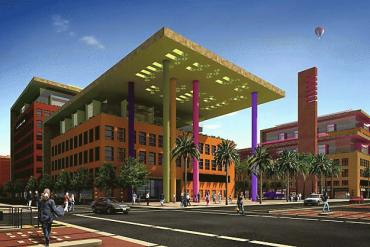 Salesforce.com recently backed away from its plans for a 2 million-square-foot campus in the Mission Bay neighborhood, another highly anticipated development in the same area as the Warriors arena and entertainment complex.

Mayor Ed Lee was understandably in an hurry to trumpet the news that he had persuaded the Golden State Warriors to relocate to a brand new arena along the Embarcadero, in the wake of a series of less than stellar developments in recent months.

The once heralded Americas Cup continues to scale back their once grandiose plans; Salesforce.com has abandoned its ambitious proposal to build a 2 million-square-foot campus in the Mission Bay neighborhood; even as Twitter moves into their new taxpayer-subsidized Market Street digs, Facebook’s stock tanks and the glow is coming off other high tech office projects; and the pending loss of the San Francisco 49ers remains a constant embarrassment.

Yesterday, the Board of Supervisors added their endorsement to the deal. Supervisor Jane Kim joined the majority in voting for a resolution backing the project and waiving the city’s traditional competitive bidding rules.

To date, just about the only people not on board are the immediate neighbors of the site. Already annoyed by the impacts of a flood of Giants fans attending games at nearby AT&T park, the Board of the South Beach | Rincon | Mission Bay Neighborhood Association fired off a letter asking to be included in the planning process from this point forward.

P.J. Johnston, a spokesman for the Warriors arena, assured the Chronicle that the plan isn’t just for a giant arena and nothing else, and that it will be a big boon to the neighborhood. Johnston, former press secretary to Mayor Willie Brown, participated in defending many of the excesses of the dot com bubble and live/work debacle. His credibility has been called into question on numerous occasions.

Jane Kim told the Chronicle that community meetings would be held “imminently” before an arena is actually designed. Katy Liddell, President of the SB|R|MB association, sent the following to the Mayor and members of the Board of Supervisors.

As board members of the South Beach | Rincon | Mission Bay Neighborhood Association, we are writing to request that representatives from our organization be involved and consulted in the planning and decision-making processes for the proposed Warriors arena, should such a facility be considered for any location within the boundaries of our neighborhood. It is truly imperative that you tap our knowledge of this waterfront neighborhood in order to create the complementary public policies that will be necessary to mitigate the harm to residents health, safety, welfare, and freedom to move about.

To say that we were surprised by your announcement of placing the arena at Piers 30/32 is a huge understatement.  Our organization is registered with the City and the Planning Department; we are very active in a number of City issues and have worked closely with our Supervisor, Jane Kim.  Ours is no longer just an industrial or entertainment zone but a thriving residential neighborhood made up of young professionals, new families, influential executives and dynamic seniors.  We are, by far, the most impacted by the present effects of AT&T Park events on crime, traffic, and congestion of the Muni Metro along the Embarcadero.  Those effects may become overwhelming if another venue is placed in the same vicinity.

One of the many great things about our neighborhood is that we are positive, proactive people, with a good record of supporting projects (e.g. the Central Subway, Americas Cup) as long as they carry no irresolvable consequences for the region.  We are fully supportive of your plans for moving San Francisco forward and providing the city with the infrastructure it needs to remain one of the finest cities in the world.  It should not be surprising that, when those plans involve our front yard, we become extremely interested.

We respectfully request that when meetings are convened that involve the Port, the MOEWD, the BCDC, the Supervisors, the Warriors or any other interested parties related to the building of the new arena, we be appropriately informed and provided a seat at the table.  Please let us know how the arena deliberation process will go forward and how you see the Association’s role in that process. Also, we would appreciate any help in facilitating an early meeting with the Warriors organization so that we can get on a cooperative track as soon as possible.

We look forward to hearing from you.